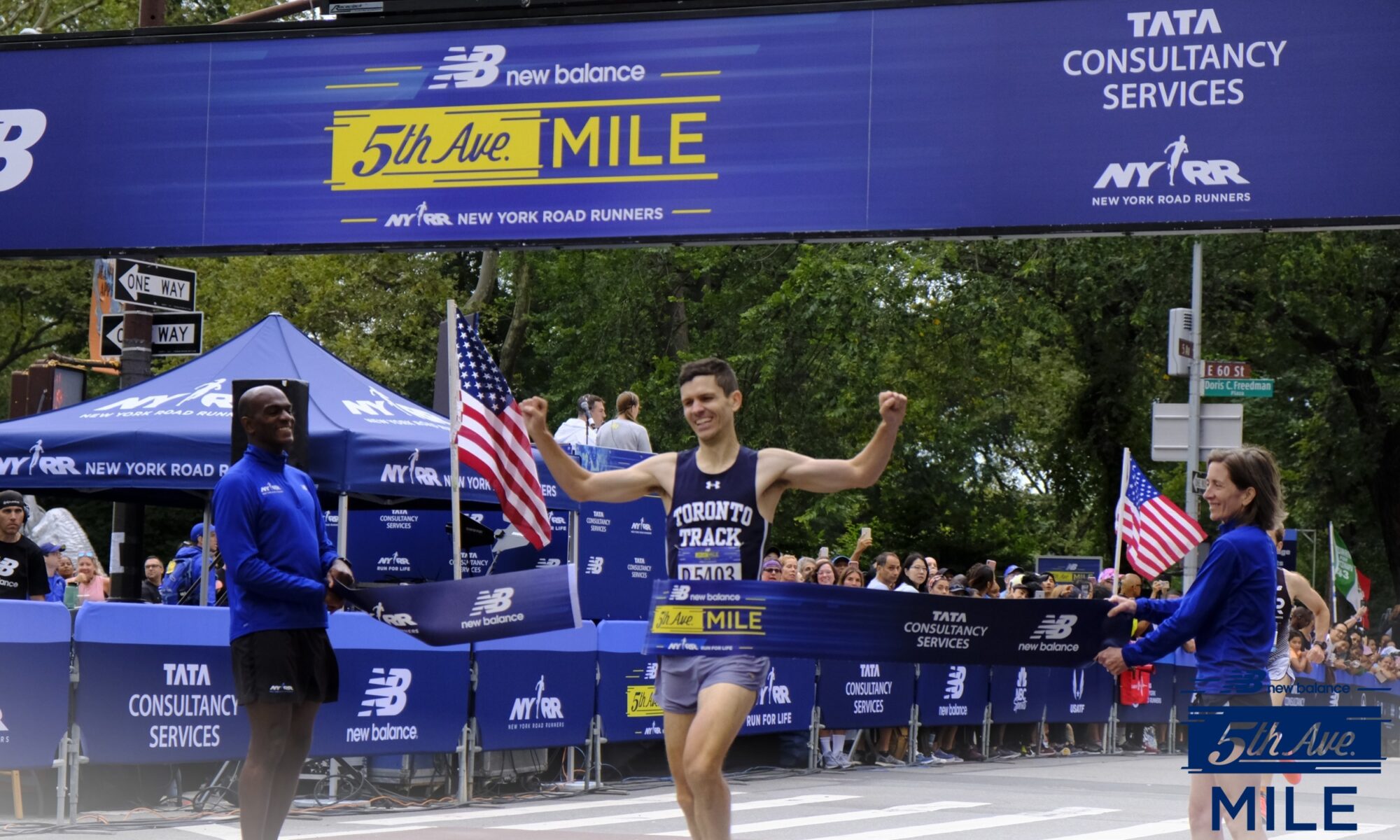 Okay, that title requires some qualification. No, I did not win the elite race: that honour belongs to Nick Willis. No, I was not even the fastest man in the 35-39 age group — thanks, again, to Nick Willis, who is 36, and a few other middle-aged elites.

Which, Nick Willis notwithstanding, still merits an OMG.

Jay told me about the 5th Avenue Mile last winter. At the time, it seemed like a fun way to wrap up the summer and cap off the outdoor season. It runs the Sunday after Labour Day, a.k.a. the day before the semester starts at U of T — so it also seemed like a nice last hurrah before all the teaching would begin.

Jay got injured, so he wasn’t able to come. I did manage to talk my partner into coming, though, to run her first ever race, and I had a lot of fun designing a training program for her.

Initially, I didn’t have big ambitions for myself. I figured I’d be spent after a summer of racing, peaking in late July. But as my form stayed good through mid-August — most notably after a half-marathon-length long run that wasn’t supposed to be fast but which I ran under 80 minutes — I started to wonder. I looked up past results for the M35-39 race, and it looked like a 4:35 (my projected finish time based on my 4:14 PB over 1500) could get me in the top 5. That became my goal.

Marta and I flew to New York on Friday evening, right after my department’s faculty-student softball game. We got in pretty late and passed out right away. The next morning, we woke up early and headed off on a recon jog.

I’d heard the course had a lot of elevation gain and wanted to check it out for myself. We jogged the 1.5 miles from our hotel on 51st and 5th up to the start line at 80th, and I saw the whole course unfold in reverse. The elevation changes were definitely apparent. To spare you confusion, I’ll describe them from start (80th) to finish (60th) but they were somehow easier to see running the course backward, which is how I encountered them.

The first six blocks, from 80th to 74th, are definitely steadily downhill — not too steep (which can actually be annoying and slow you down) but sort of perfectly inclined for hammering. At 74th, it heads quite sharply uphill. It’s steeper than the downhill, but it’s relatively short — only about three blocks. Then it’s pretty much flat, slightly uphill then slightly downhill, for two blocks to 69th. Then it’s that same nice downhill grade, perfect for hammering, until about 64th, when it becomes almost flat, but still slightly downhill.

In other words, it’s potentially a very fast course. You can hammer the first quarter mile, attack the uphill (because it’s pretty short), hammer the third quarter mile, and then just try to hold on. That became my plan. On the track, I tend to hold too much back in the middle laps. Here, I felt like I had no excuse. I needed to attack the uphill, because uphills are hard, and easing off in the second lap is suicide — and it would be crazy not to attack that downhill, since downhills are easy and if you don’t attack then you’re wasting the gift that gravity has given you. So there was no choice to run an all-out middle section.

After course recon, it was the usual pre-raceday stuff. We went to some of our favourite NYC places, we got some good books and records (first pressing Sonic Youth Bad Moon Rising!), and then we started getting nervous, had trouble falling asleep, blah blah blah.

Marta’s race was at 8:10, mine at 8:25. So the alarm was set for 6am (neither of us is a morning person). I got right up, made a crappy Keurig coffee, ate a bunch of Premium Plus saltines, and then let my digestive system do its thing. Right before leaving, I popped my caffeine pill — which, after a week-long caffeine fast to maximize the effect, was incredibly satisfying. We were out the door around 7:10, and got to the start area around 7:35 after a leisurely jog up 5th avenue. We did our usual pre-race routine and Marta was off. (Later I would learn she finished in 7:11, about 30 seconds faster than what she was targeting. Not too shabby.)

I did a few strides on my own and then made sure to get into the corral early. There were still probably 300-400 people ahead of me, but I just acted like I knew where I was going and pushed right to the front centre and held my ground. There were still 15 minutes to race time, so I jumped around a lot and sprinted in place and generally made myself look like an idiot. But I noticed not many other people were doing anything like that, nor were they trying too hard to push me out of my dead centre position. So I started to wonder… what if I won this?

The gun went off and it was immediately clear that this would not be a walk in the park. I sprinted out really fast but still found myself in second position. I then settled into place behind the runner I would later learn was Ciaran O’Donovan. The pace was fast but manageable. I could tell right away I was feeling good. I passed the quarter mile in about 65 or 66, plenty fast.

When things turned uphill, it was apparent that O’Donovan was going to ease off. I didn’t want to do that, so I had a choice to make: was I going to race his way or mine? I decided to do it my way and attacked. I pulled around him and was off on my own.

At this point I looked up the road, and there was no one in front of me. On the sides of, behind barriers, were tons of loud fans. Thanks to my Toronto Track jersey, some of them were screaming “Go Toronto!” or “Wooo Canada!” I allowed myself to enjoy it. OMG I’m leading the 5th Avenue Mile.

As the road flattened around 70th, I pushed. From the crest of the hill, I could see the finish line in the distance. It didn’t seem that far away. When the road turned downhill, I started kicking, knowing that running downhill always feels more taxing than it really is, that I needed to feel like I was right on the edge to be where I needed to be.

Earlier in the week, Phil had forwarded me a strategy email from the Central Park Track Club, which he’d trained with when he was living in NYC. Its advice over this portion of the course was “COMPETE. COMPETE. COMPETE.” I repeated the words to myself.

When things flattened out around 65th, I could feel the lactic coming. I told myself “Relax, but don’t slow down.” I tried to relax my face and shoulders. I felt the lactic going back where it came from. I was still going fast.

Before I knew it, I was through the finish line, I’d broken the tape, and I had won.

The enormity of it was on me straight away. Every sentence of my thoughts began with OMG. I was very well aware that this was a life highlight. Right away, I wanted to see pics of me breaking the tape.

In the finish area, I had a chance to chat with O’Donovan, who was extremely gracious, and also I think a little surprised that I’d kicked so early and managed to hold on. “You were fading there at the end,” he told me — “but not enough.” I hadn’t been aware of fading too much, but if you look at the photos, you can definitely see that he made up some ground. My second and third quarters were what won it for me. This is a very important lesson for me as I pace my middle distance runs next year. I need to push the middle and build up a lead. I can’t count on a finishing kick, because I don’t have one — not yet, anyway.

I also got to chat with the third-place finisher, Dan Cleary, who’d won the gold medal in the NCCWMA 800m where I got bronze (and tied up massively in the finishing straight). “Well, you did say you were more of a 1500 guy!” he told me. Yes, indeed.

After regaining consciousness a bit, I started asking around about medals and podiums. There were no medals or podiums. Winners fill out a form and the NYRR mail them a plaque in 6 weeks. In an otherwise perfectly-run race, this seemed pretty anti-climactic.

The next thing I wanted to know was my time. This required a lot of patience. Back in my hotel, I looked up the results page, but there were no live results. It would have to wait until after the pro race. Marta and I got some breakfast, I drank two fully caffeinated coffees, then we checked out of our hotel and went to catch the pro races. We had an amazing view of both amazing finishes. Then we wandered over to a spot where you could give a volunteer your bib number and take a photo with your time displayed on a TV screen. This was how Marta and I learned our times. I couldn’t believe I’d run 4:27.

How is all this possible? If I’m being cynical, it’s because the course is a net downhill, and I was wearing magic Nike Vaporfly shoes (which should make me 4% faster, not a mere 3%). But I don’t know. Yes, there’s a lot of downhill, but there’s also that sharp uphill. There’s the fact that I wasn’t in spikes, that the surface was uneven and filled with potholes. There’s the fact that Nick Willis’s mile PB is on the track, not the 5th Ave. Mile; indeed, his track PB is two seconds faster than his 5th Ave. Mile PB. So I think it’s a legit time.

The real difference, I think, is that I attacked from the second quarter. I didn’t have the feeling, as I so often do after 1500s, that I held too much back in the middle laps. By attacking early, I “committed” to the race early, and having someone running hard right behind me kept me honest. Looking through the pictures, I think I might have even let up a little bit at the end — might have benefitted by continuing to attack rather than relaxing…

Anyway, my main takeaway from this will be to attack in the second lap from now on. To run 66s in the 1500, for sure, and not to hold anything back in the middle laps — to take the lead and set my own pace.

Coming back down to earth

After wandering around SoHo, Marta and I headed back to the hotel, got our stuff, and took the train to the airport. We got home around 11pm, and I had to teach two courses the next day. I got up at 6am — really early for me — to make sure everything was in order. I made it through my classes, got a good night’s sleep, spent the next day preparing more lectures, and delivered them today. That was it for the week. Once they were done, it was time to crash.

Before going for a nap, I checked gamefacemedia.com for the hundredth time to see if the race pics had been posted. This time they had. And so I spent a few hours scouring the site for all the pictures of me. It was worth the effort. The pics are so good that I think I could retire from running now and be fully satisfied. After that, I went and bought a frame to put one of these pictures up in my office. Then I wrote this very long post.