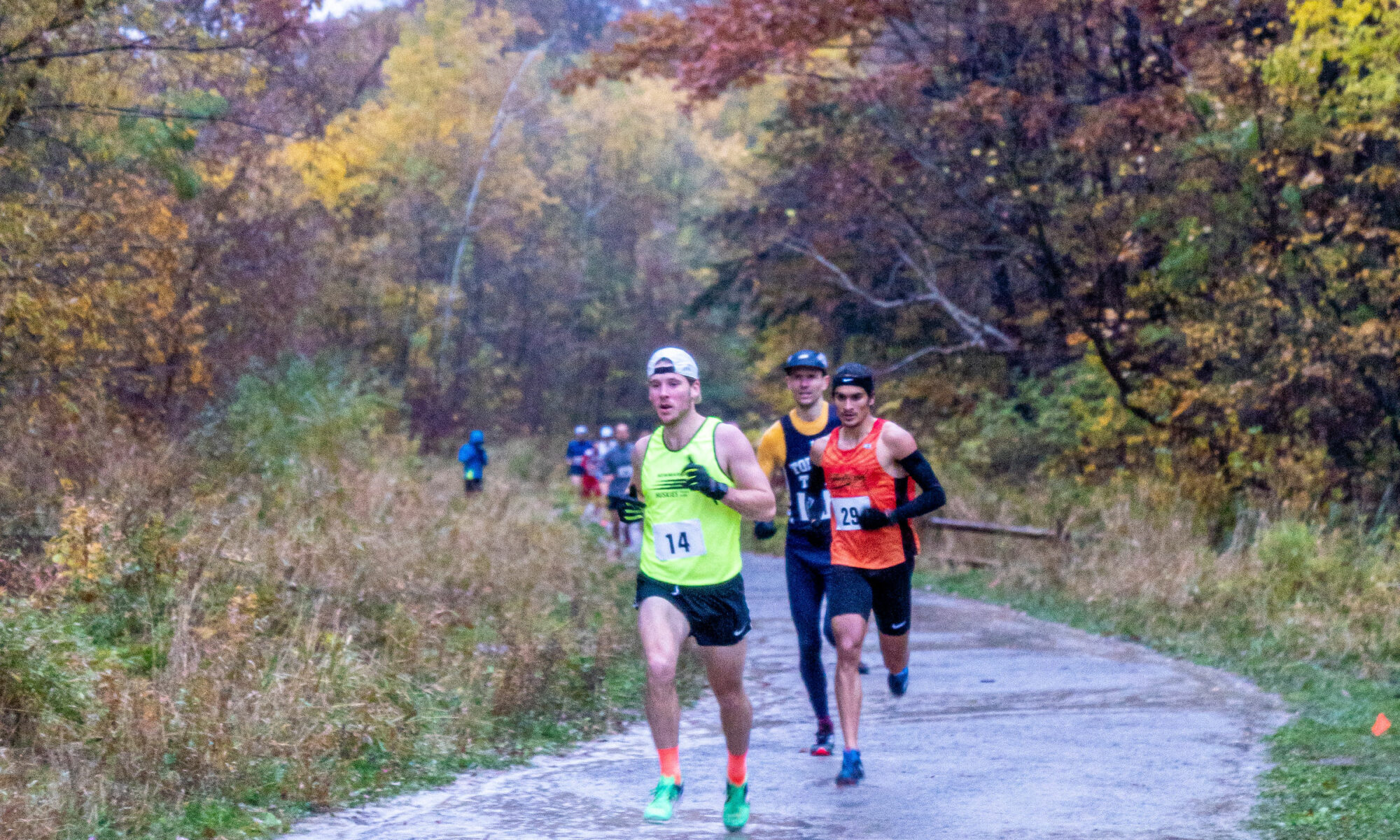 This is my favourite time of year. I love the leaves, the cool days, the way you appreciate every moment of sunshine, since the days are getting cloudier and shorter… And I also love cross-country and some of the other weird races that only happen this time of year. Such as these two.

I got an email about the Wild Mile shortly after getting back from the 5th Ave Mile. Naturally, I was going to sign up for anything one mile long at that point. The race did sound a little weird, though: a Wednesday night “road mile” on a gravel trail, on an out-and-back course with two fairly steep elevation changes. In fact, it didn’t just sound weird — I knew it was weird, since the race was in the Nordheimer Ravine, where I run pretty much every day on my easy runs. It would be steep, and there would be a million different surfaces: hard-packed gravel, loose gravel, mud, dirt, wooden bridges, some interlocking brick…

Well, weird as it sounded in September, it was all the weirder in late October. When the rains settled in around mid-October, the Nordheimer path got very muddy and stayed that way. With construction on the nearby Winston Churchill Reservoir, the main walkway was closed, forcing everyone onto a narrow, muddy path on the steepest part of the course. Also, the race was scheduled for 6pm, and the sun was setting around 6:15 — so with all the tree cover, visibility wasn’t great even at 6.

Two days before the Wild Mile, at my Monday UTTC workout, Coach Mike told me straight-up not to run it — that the course was too technical and I might get hurt. I took this seriously and more or less decided not to run. But then I scouted the course the next day, and the visibility didn’t seem all that bad, and it was clear that with spikes on the footing wouldn’t be disastrous. Also, there were good prizes: free Saucony shoes to the top three finishers (no distinction in prizes for first, second, and third place). So then I thought I’d maybe just do it after all.

But then it started raining on the morning of the race, and it wouldn’t stop. Obviously I should have decided not to race. But a voice said, “What if no one shows up because of the rain? The free shoes would be yours!”

So obviously I went. And, as it turned out, so did everyone else. Everyone was saying the same thing: they figured no one would show and they’d get the prizes all to themselves.

Anyway, it was very wet — still raining hard — and very cold. I was dressed in tights and a long-sleeve base layer. There were a lot of really fast 25 year olds in attendance, so I figured I didn’t have much of a chance. But I did decide to go out hard, not even think about first or second place but try to stay in range of whoever was in third place (shoes!!) and see if I could put in a big push at the turnaround and stay away until the finish.

That was a lot of setup for what will be a very short race recap (miles aren’t very long). I went out hard, and found right away that it was going to be fast. The good news is that I made it into the lead group. The tricky part was that there were four of us. NBC voiceover: “One of these boys will be going home without a pair of shoes!” I stayed right in fourth place over the first hill (the narrow one), then stayed there when my friend Nathan capitalized on a slip by Dude Number Three to move into second position. Nathan got a gap on the second uphill and by the turnaround looked like he’d pretty much locked up his shoe-prize.

I didn’t even try to follow — I just wanted to try my move on DNT. On the second climb, I could tell DNT was hurting a little more than me, so right after the turnaround I put in a big push, which I continued right down the narrow hill — which was very slippery now, and I was in spikes, while DNT was clearly in flats (thus the slip on the way up). Anyway, I just really gunned it in that third quarter, and I could feel I had a pretty big gap. I could taste (feel? on my feet?) the Saucony shoes. I had a bit of a scare with 200m to go, when Simon (who had finished the masters mile by then) yelled “HURRY UP! HE’S GAINING ON YOU!” Thankfully I had a bit in the tank, and accelerated into the finish.

The next afternoon, dear reader, I went and picked up my free shoes.

I ran the Sunnybrook 8k last year. It was my first cross-country race ever, and I really enjoyed it. I came in a very distant second to Michael Gill, but I had absolutely no expectations, so that second place felt like a massive victory. This year, I was in much better shape, and Michael Gill wasn’t running. So I was sort of hoping to win.

Before the race, Simon gave me my game plan, as he often does. “Just stay with the leader for the first lap, then see how fast you can run the second.” Okay!

The race went out pretty fast, and Nick Croker (who I know both from last year’s Sunnybrook 8k and from the Wild Mile!) took the lead right away. I tucked in behind him and let him pull. I’d heard he’d just run a 1:13 half marathon — two minutes better than my PB — so I knew he might go fast. Indeed, he did, putting in two 3:20 kilometers to get things going. But I could feel him slow down in the next two kilometers. I didn’t try to pass — I just heeded Simon’s advice and stayed tucked in. There’s a rolling section coming into the start/finish area, so I chose that spot to put in my push. I ran another couple of 3:20 kilometers and I was off on my own.

On the second lap, you do a steep downhill and then climb the Doug Smith Hill. At the top of the hill, I wasn’t feeling so relaxed anymore, but I knew I didn’t have to push too hard to maintain my lead. So I tried to keep things respectable but didn’t bury myself. And I did get the win.

No free shoes this time — but something maybe even a little better. Vern brought snacks and refreshments to the race, and among them were several litres of chocolate milk. Seriously, nothing is more delicious than chocolate milk after a hard race. I drank almost a whole litre.