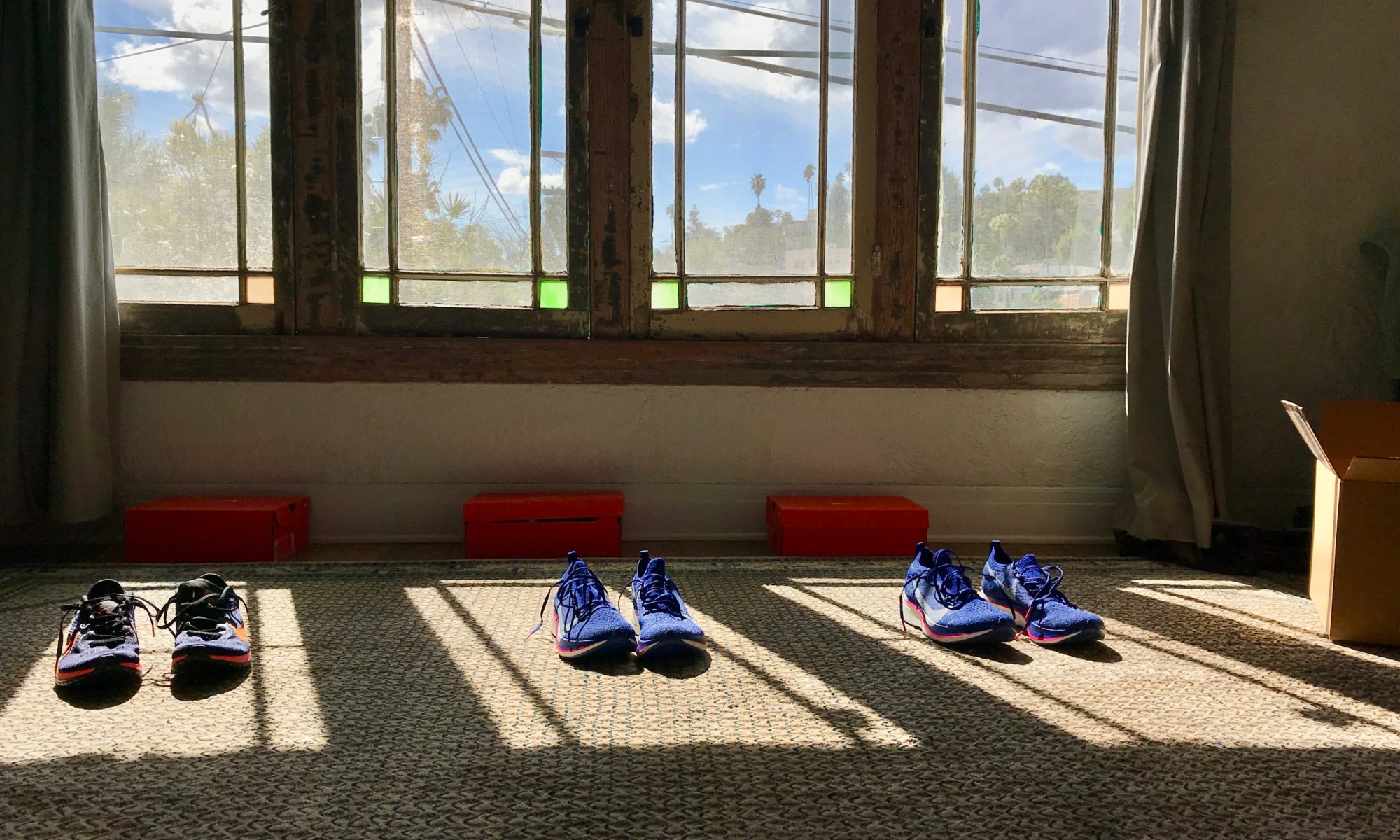 On Saturday, I ran the Spring Run Off 8K in a time that struck me as surprisingly fast. I took it relatively easy until the last 2km, but still finished with an average pace of 3:25/km, on a very hilly course, which is faster than I ran similar cross-country races in the fall. So either I’m fitter than I was in the fall, or I was just having a good day, or… it was the shoes.

Because, yes, I was wearing Nike Vaporfly 4%s.

I really debated whether I wanted to spend $330 on a pair of shoes. For a while, the scarcity of the mythical Vaporflies (can I pluralize you like that?) took care of the problem — I couldn’t find any, and if I was undecided about paying $330 in store, I was definitely not going to pay $500 or more on eBay.

In the months before the Scotia Half, my strength wavered a bit. I started following Black Toe, a local running shop, on Instagram to be able to see any announcements about impending arrivals of fresh stock. (To be perfectly honest, I created an Instagram account just to be able to do this.) Sometime in early October, they made the announcement, and I wasted several hours in line outside their store, only to realize they’d only had a couple of pairs in each size, and by the time my turn had come (I was about 8th in line) the 10.5s were all gone. I ran the Scotia Half in HyperSpeeds and my time was fine.

Still, knowing myself — knowing how obsessed I am with running, gear, and running gear — I knew in my heart of hearts that I would end up with Vaporflies at some point. Then there was the New York Times piece that suggested they really do make you 4% faster…. And Alex Hutchinson’s piece on how the magic might be in the foam… And I asked Alex one day if he really thought they worked, and though he wouldn’t really come out and say it, I could sort of see he thought they did…

Anyway, in February I was in the airport bound for a vacation in LA when I occurred to me to check the stock on Running Warehouse. Sure enough, they had them in stock. Knowing RW’s generous free return policy from my days living in San Diego, I ordered two pairs — a 10.5 and an 11. This way I could not only make sure I got the right size. I could also test whether they actually worked, and get my money back if they didn’t.

They arrived at my Airbnb a few days later, and my experiment began.

On the Friday, I ran the same route, aiming for the same perceived effort. Conditions were one degree warmer and quite a bit windier. But subjectively, the conditions felt very similar. The difference was that I was wearing the Vaporflies. This time I ran the course in 11:13 (3:25/km) and 10:50 (3:18/km pace), with 3k splits of 10:20 and 9:58.

My watch did show my heart rate as a bit higher on the Friday than Monday, so it might have just been a placebo — the fancy shoes made me push harder. But my optical heart rate monitor on my Garmin is pretty useless (I’ve since bought a chest strap), and I definitely felt equally tired at the end of each workout (in fact, I remember being a little more worn out on the Monday). Anyway, you’d think I’d feel a 26-second difference! That’s a lot.

My conclusion then was that the Vaporflies were probably the real deal. I kept the 10.5s, which fit me best, and returned the too-loose 11s. (If you currently run in Zoom Streak 6s and wonder if you need to size up, you don’t. Get the same size as the Zoom Streak 6s.)

After the Spring Run Off, I would again say they are probably the real deal. I don’t know how they work, but I’m pretty convinced they do. I’ll be jealously protecting my miles in them, using them only for road racing (but for all road racing — including the Fifth Avenue Mile in September!), hoping to get a good year or more of use out them.