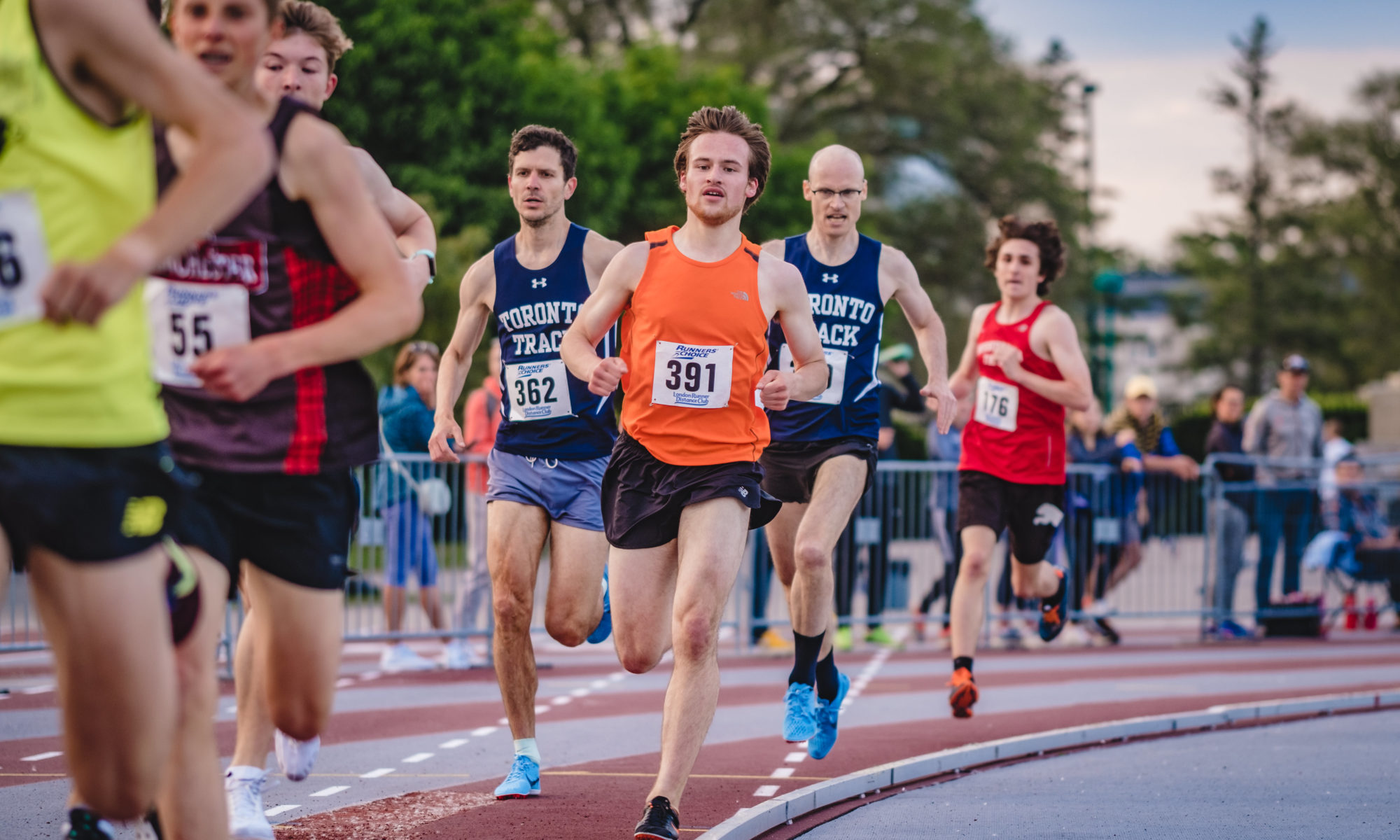 What follows is the story of those two 1500s — how I raced them, how they felt, and what I learned.

First, a bit of catching up. I started this blog to chronicle my summer outdoor track season of 2019, which, for various reasons, I decided to devote to the 1500. I raced a fairly inconsistent winter indoor season, in which I completed three races: two 3000s and one 1500, the latter of which I ran in 4:25, feeling like I hadn’t quite given it my all. Based on that, I figured I could go below 4:20 outdoor.

Since the outdoor season wrapped up, I’ve been running a lot. I’ve increased my weekly volume to around 100km and, in April and early May, done a lot of the hard tempo and 5k pace training necessary to get my aerobic system in shape. I managed to avoid injury in that span, so come June the plan to was keep up the volume and aerobic work but start adding in anaerobic “tuning” speedwork into my workouts and get some experience with a few 1500 and 800 races. The idea is then to peak in July with a few goal 1500s.

The mile at UBC went a little better than I expected. Even though everyone in my club was pretty meh about the whole thing (“Only 4:40? You can definitely go faster than that”), it was the first time I’ve ever run faster than the McMillan Running Calculator predicted I would for a race shorter than 5k (based on my previous any-race PB of 16:20 in the 5k). It was also my highest ever age-graded performance, an 82.88% (my 5k PB was a 79.95%; but I did turn 38 two weeks before the UBC mile). So it gave me some confidence that I might actually have some aptitude for the 1500, which I’d chosen more or less randomly, when the evidence to that point suggested I was more of a 10k–half marathon type of runner.

I didn’t take the York Twilight 1500 as seriously as I did UBC, for which I caffeine-fasted and tapered significantly. This was by design, both to get my volume back up in a period where I’m trying to build rather than peak, and also to take pressure off running a fast time. I wanted to give myself chance to run my target distance, early in the season, with very low stakes, just to see what it felt like.

I just about missed it entirely, though. The 1500 was scheduled to go at 6:30pm, and I set out from my house really early, around 4:00. But I got on the wrong branch of the subway and only realized it once I’d gone all the way in the wrong direction. My mistake cost me over an hour, and by the time I got to Pioneer Village Station I’d read half of the book I brought with me (Miriam Toews’s Women Talking) and it was after 6pm.

It seemed like I wouldn’t have time for a proper warmup. Luckily I arrived at the exact same time as Jay, and we got cooking. We ran for about 15 minutes and then got into our spikes and got ready for some strides. I’d had my traditional beet juice to drink three hours before the race, but once I finished my jog I realized I’d forgotten my caffeine pills at home. Jay offered me one of his, but the day seemed doomed, and I didn’t want to cap a shitty race with a sleepless night, so I declined. Anyway, we did our strides, and once we were done, we looked at the clock and saw that it was 6:45 and the race definitely wasn’t ready to go yet.

It wouldn’t be ready to go for another hour — the meet was waaaay behind schedule, even though our event was the third on the itinerary. We tried to stay warm by doing intermittent strides, but it was a cold day, and we didn’t want to tire ourselves out, so by the time we finally got going, I was feeling downright chilly.

The effect of all the stress and delay was that I was not at all nervous when the gun went off. I just wanted to get it over with.

I went out fairly hard, trying to find a spot somewhere in the middle of the pack. I passed a few people from lane 2 on the first curve and passed 300m in 50s, a little faster than expected. I was through 400 in 66s, much faster than the 69 I was aiming for. From that point, I ignored the clock, just trying to push hard and cover moves. A runner passed me in the second lap and I tried to stay with him for the rest of the race, always succeeding but sometimes burning some of my “Mario mushrooms” in the process.

By 1200 I was feeling pretty dead but tried to kick like hell, especially since the guy in front of me was clearly beginning to do so. This worked well enough to 1300, but with 150 to go I was feeling dead like I never have before. I wasn’t totally sure I knew what lactic acid really felt like before this race, and I didn’t quite understand the expressions “tying up” or “being in the tunnel.” I got an effective education over the last 100, which were very painful, and during which the guy ahead of me pulled away by a couple of seconds.

Afterwards, I was totally dead. I was coughing and my ears were popping — my physiological tells of a very hard effort. My cool-down jog was extraordinarily painful. My calves ached. The next day was even worse: it was painful to walk and my lungs were so clogged that I intermittently lost my voice.

Thankfully my calves recovered and I was able to get in a Thursday UTTC workout (after which the Raptors won the NBA title — life highlight). My calves were still a little tender by Sunday, so I was slightly concerned. But I was dying to run the London 1500 night, so decided to go for it.

Jay told me about London 1500 Night some time in the winter, and I was immediately in. All the best 1500 runners from Southwestern Ontario and beyond flock to the Western track — so many that there end up being heats of 15 runners with seed times within two or three seconds of one another. I could hardly believe it, but that’s exactly how it turned out for me. I put in an ambitious seed time for 4:15, and I ended up in a heat of 16 runners aiming for 4:15-4:18. Having run in a lot of races with high schoolers, super-fast collegiate runners, and rather slow masters runners, I was thrilled at the prospect of running in the middle of a big pack shooting for the same time as me.

Getting to London — a 2.5 hour drive — would normally be a bit of a pain, but Jay was driving, and our club mate Michael was along for the ride, and the time flew by. When we arrived in London around 6:30 — 90 stress-free minutes before our heat was set to start — the weather was beautiful: a light breeze, sunny skies, and a temperature around 20 degrees. We took our time warming up while enjoying the first 11 heats, and then it was time to go.

My plan this time was to run much more even splits, to avoid burning my Mario mushrooms in accelerations, and to start my kick much later, around 150m to go. I was hoping to improve on my YUTC time, but more focused on trying out a new strategy.

I ran a very relaxed and deliberate tangent into the first curve from about lane 5. I was very relaxed through 300 (51s) and 400 (68s) and stayed relaxed through the second lap. I was maybe a little too relaxed, as on the third lap I could hear Jay — who finished 10 seconds behind me at York — coming up behind me. He passed me at the bell, but I resisted the urge to sprint to catch him and stayed relaxed. Jay built up a fairly sizable lead by the final curve, but then I kicked at 150m and just barely caught him at the line. He finished in 4:17.98 — a remarkable 10 second improvement on his Tuesday race — and I came in in 4:17.95, a new PB and age-graded best of 83.35%.

Although it wasn’t nearly as dramatic an improvement as Jay’s, this race felt a lot better than York. I wasn’t dead at the end: I wasn’t coughing, my ears weren’t popping, and my cooldown jog was pleasant. I actually felt pretty elated — an increasingly rare runner’s high. My calves not only held up in the race but felt better afterward — and they’re not even slightly sore today.

This week has taught me a few things. First, even pacing and a shorter kick seem to work well for me — no surprise, I guess, given my lack of sprinting experience or prowess. Second, a time like 4:15 seems reasonable for a July goal race for which I’m properly tapered, following another few weeks of intense speed-tuning sessions. I need to get more comfortable at speed, and I need to internalize the 68s-per-lap 4:15 pace. I think another month of workouts, and maybe a few 800 races, should get me there.