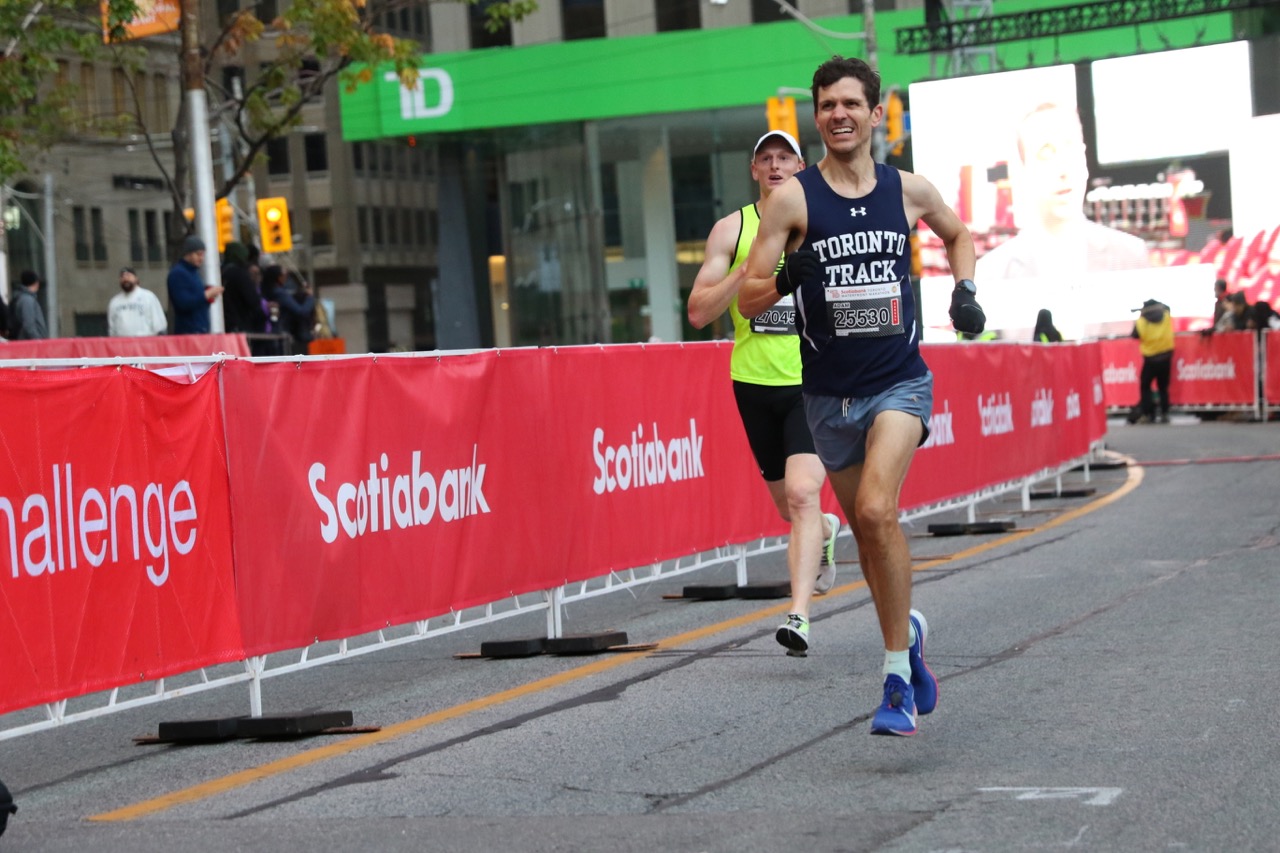 Last month, I ran the greatest race of my life (and had one of the best experiences of my life) when I won my age group at the 5th Avenue Mile. My time, a 4:27, was also by far my best running performance ever.

One of my favourite things about setting a new “overall PB” is seeing how it affects all your training paces and equivalent race times. Since 4:27 was almost ten seconds faster than I was supposed to be able to run a mile, it radically changed all my paces and times. Here’s what the McMillan Running Calculator currently thinks I can do (and the insane things I’ll need to do to be able to run a 4-minute 1500):

As you can see, McMillan thinks I can pretty comfortably run a 5k under 16:00. Since my previous PB was 16:20, that seemed pretty ambitious. Also, the most competitive 5k in Toronto this fall — the 5k race at the Scotiabank Toronto Waterfront Marathon — is steeply uphill at the end, so not ideal for setting a PB. But I thought I could at least target 15:59 and see how I fared on that hill..

I’ve been training as usual with the UTTC Masters group this fall. We’ve been concentrating on hills (usually Mondays and Thursdays; see my Strava training log for details!), which I really enjoy, and which I know help to improve my strength, speed, and form.

But I’ve been having the most fun on my weekly Saturday runs at the Mount Pleasant Cemetery. I’ll devote a full post to the “MPC Tempo” runs at some point, but for now, this is a 5k tempo run (sometimes 4-miles if the mood strikes) with a bunch of my UTTC Masters friends and some other excellent (mostly Masters-age) runners, including Alex Hutchinson.

Those times put me in second place for the “Mount Pleasant Cemetery Tempo 5km” Strava segment. I looked up the CR, owned by Ethan Davenport, and it was 16:20 (admittedly, achieved in the midst of a monster workout), only eight seconds faster than my most recent tempo. It was time to get out the Vaporflies and try for a CR! That’s what I did. I started about a minute behind the rest of the group, and then when I caught up, Alex and Jay took turns pacing me through the last kilometers. I came in in 15:57 (more like 16:10-15 true 5k pace) and the CR was mine!

The next week I went for the course record for the full 4 mile loop, and snagged that one too. After that, I was in NYC for a week running my UTTC workouts in gravelly, uneven loops around the Reservoir and loving life (if feeling a little chilly and slow on a few occasions). Then I tapered a bit and came in ready to crush the Scotia 5k and go sub-16!

I was attending (and organizing!) a conference all weekend, and I had a houseguest in town. So I was busy. But I managed to sneak out and grab some throwaway cold-weather clothes from the Salvation Army at Lansdowne and Bloor and then head down to Exhibition to pick up my bib. The last two years, I’d run the Scotia half, and it was decidedly less stressful heading into a mere 5k. I was hoping to be able to locate some beet shots at the Expo and — what luck! — that’s exactly what I found. I was sick of paying $6 for organic beet juice every time I wanted to race (and Alex H. informs me that organic beet juice actually has fewer nitrates than non-organic, due to the lack of artificial fertilizers, thus defeating the purpose) but the beet shots hadn’t been available in Canada. Well, they are now, apparently, from Beet It Canada. (If you want to send me a free case for this plug, I’ll take it!)

I woke up this morning at 5:30, took my beet shot (so much less gross than drinking 500mL of real beet juice), ate some saltines, drank some coffee, took my caffeine pill around 7:00, put on my ridiculous throwaway costume (super tight green plaid pajama bottoms, $3; zip-up hoodie, actually sorta stylish and definitely practical, $4), and hit the road. It was an absolutely glorious run down Crawford Street. The sun was just coming up as I entered Trinity-Bellwoods; beet-red (!) dappled clouds lay on the eastern horizon behind the CN Tower. I saw more and more runners as I continued down Strachan and right on Lakeshore. I got to the starting area with about 20 minutes for drills and strides. Then I took off my shoes to remove the super tight plaid pajama bottoms, pushed my way to the front of corral, found Nathan and Phil, and ditched the hoodie right before the gun.

My plan was not to try to stick to the 3:05/km pace recommended by McMillan, which might result in a blowup (was the 4:27 was a fluke? what if I’m better suited to middle distance?) but to try to stick to around 3:07–3:09 to come comfortably in under 16:00 without risking blowing up. But I wanted to be a little closer to 3:07 in the opening kilometers to compensate for the steady uphill in the closing kilometer. I figured my friend and UTTC runner Nathan would be a perfect person to follow, since he had run 15:40 a few weeks before and told me at the start line he was hoping to run around 3:10/km (he always goes out a little fast!).

In the opening kilometer, I stuck to the plan. A group of about ten went out really fast, but Nathan was keeping it under control from the start. I stuck behind him and came through 1km in around 3:08/km — right on pace, though it felt pretty leisurely, and my Stryd footpod told me we were only moving at around 3:15/km by the time we actually crossed the marker (the start was fast). I expected Nathan to speed up a bit in response, but he kept it steady, and when we passed 2km in a 3:15 split, I knew it was time to move. I told him, “I’m going to pick it up a bit,” and went to the front. I heard him behind me for a bit, but eventually he dropped off, not having his best day.

In the third kilometer, the course headed up and down an overpass. I was still feeling really good and didn’t want my sub-16:00 dream to fade away, so I attacked the uphill and really pushed on the downhill (my Stryd had me well under 3:00/km for that stretch), passing two or three runners in the process. I split 3k at around 9:33, dangerous territory for sub-16:00.

The fourth kilometer was pretty flat and I kept talking to myself, telling myself not to let it slip away. I ran a pretty steady kilometer in the 3:10 range.

When I turned left onto Bay Street, I attacked. I still felt like I had a lot left and I knew I’d have to burn it all up on the uphill if I wanted to hit my goal. As soon as the road turned up, I could tell I was going to be able to do it — I was feeling great and my body was responding to everything I asked it to do. Up ahead of me, I could see six runners: three who looked like they were slowing and three who were clearly going to make up the podium. As I ran that last kilometer, I just focused on reeling in the three slowing runners, one by one. I wasn’t sure I’d get the last one, but a mad sprint at the end just barely got me past him.

As always, the first thing my mind turns to when I accomplish a goal is doing something even bigger. The next obvious goal is a faster 5k — maybe a 15:30 like McMillan predicts I’m capable of. I think I could do it — my uneven pacing definitely left a lot to be desired, and my crazy 3:03ish last kilometer on a pretty steep uphill clearly showed I’d left too much in the tank — but I don’t see any great races coming up around here. So I might be forced to settle for cross-country for a bit and then turn my attention to 3k and 5k indoor track races (ick).

Before that, though, there’s a fun-seeming outdoor gravel mile to run next week, the Wild Mile. That’ll be the next thing I write about here.