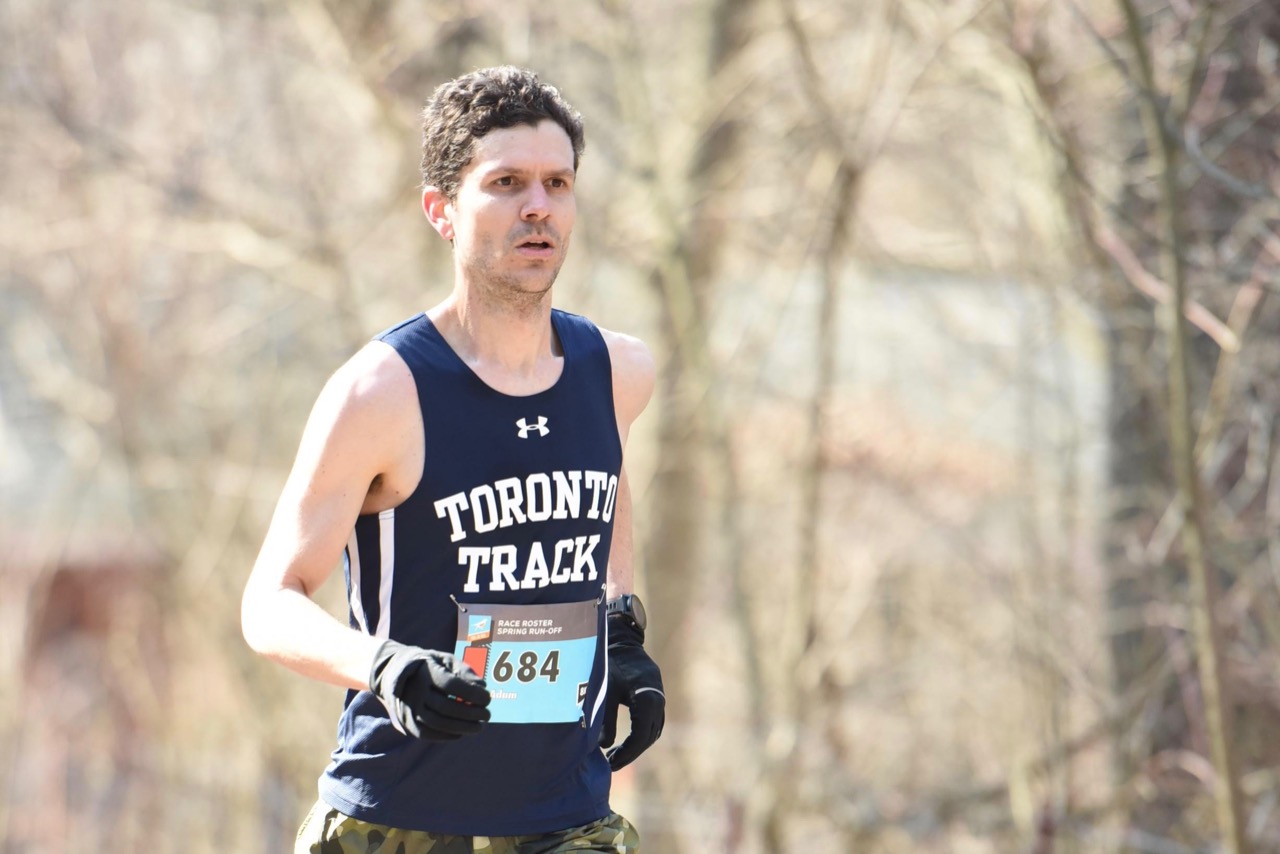 Having gotten all the heavy lifting posts out of the way, I can finally write the kinds of weekly reports I had in mind when I started this blog.

This week: the Spring Run Off race in High Park, which I ran this morning.

I signed up for it a couple of months ago, before I’d actively started planning my summer season. At the time, I was thinking of it mostly as something to look forward to, since I didn’t have the Indoor World Championships to motivate me, as my clubmates did.

It started looking a bit different once I started planning. According to my periodization approach, which is focused on a goal 1500 race in July, it doesn’t make much sense to race hard so early in the season and risk injury. This is especially so since I’m still ramping up my volume (I’m up to 95km or so) and shouldn’t be pushing too hard.

Plus, a few little injuries have been nagging me for the last couple of weeks — something in my hip flexor, and something in my adductor longus (the two are definitely related). These muscles have to do with lifting legs — and the Spring Run Off is a very hilly course, with lots of extra leg-lifting.

I had a sense of this, but really hadn’t processed it until I previewed the course last weekend. It’s really hilly — like, much hillier than the cross-country courses I raced last fall. Particularly worrying for me were the two super-steep downhills, on which my slightly injured muscles made their displeasure very clear during the preview.

So I decided to treat the Run Off like a tempo run — fast but comfortable, especially on the uphills and downhills, when my grumpy muscles were most at risk. To encourage myself to stick to this plan, I didn’t really taper much this week, and ran a relatively hard workout on Thursday. (My workout on Monday was incredibly hard — but also really gratifying, since I hit all my paces and finished feeling strong.)

Last night, as always before races (even ones run like tempos?), I had a bit of trouble falling asleep. I decided to spend the time visualizing the race in minute detail, figuring this would either put me to sleep or help me plan my approach. Well, I didn’t fall asleep until I’d finished, but it was a useful exercise. It helped me see where my effort would best be spent: in the flat section after the first long downhill, in the long flat loop after the first big climb, and in the rolling terrain and the incredibly steep second descent. I also decided that if I took it easy up to the sharp turn around 6.25km, I would let myself really race the last 1.75km, including the final hill.

I woke up at 7:30 for the 10:00 start. I drank an EmergenC, ate a bunch of Premium Plus saltines (Marta is recovering from food poisoning, so there are lots kicking around) and read the news. Then I went for a quick run to test out my clothing strategy. I was hoping I could get away with taking the subway to High Park in shorts and a singlet and skip the baggage check. But it was a really cold 5 degrees without the sun up yet, so I decided to wear warmup pants and a jacket and check them. At 9:00 I got on the subway, then I jogged around the upper part of the course for a bit once I’d arrived. The sun was out by this point and it was clear it was going to be a nice day. But it was still cold. (I noticed a lot of people had come in shorts and singlets, and they tended to be warming up fast — probably to keep warm.)

I got my stuff checked, did some strides, and headed to the start line. I saw Alex Hutchinson and said hello. He was wearing a Masters Elite bib — pretty swanky. I got myself established near the front of the red corral and we were off. (This will all make more sense in reference to the Strava activity linked there.)

My approach was to take it easy, especially on uphills, then to push a little on gentle downhills and flats. I did this right from the start. I passed the 1km marker in 3:17, which seems fast, but it was mostly gently downhill, and I’d let a ton of people get way ahead of me. Then there was a slight rise, which I eased off on, then a flat section, then the beginning of a steep descent (the same climb on which the race ends, in the opposite direction). I found this descent was as steep as I remembered and pushed just a bit. I ran the second km in 3:19, again mostly because of the downhill.

Once I was at the bottom, I caught up with Alex. The previous week he’d told me he was gunning for one of the cash prizes they were giving to the top three 40+ Masters. Since I didn’t have a goal of my own, I offered to help him. When I caught up to him, I asked who we were gunning for. He pointed to someone about 30 meters ahead of us, saying he was the third Master, but told me to go ahead, that he wasn’t feeling good. I said I wasn’t racing and would be happy to do a bit of pacing. This is when we hit the first big climb, which I took very easy. I told Alex my strategy was to relax on the uphill and then pounce on the flat section afterward. That’s what I did, and before long I’d caught up to his mark. Alex was right with me. We kept pushing around the loop (running with a very fast Lyndsay Tessier for a bit) and by 5km (which we passed in 17:11) Alex was firmly in the Masters cash prizes.

I took a very gentle approach to the nasty, insanely steep downhill at 5km, and Alex passed me. But then I pushed past him on the rolling terrain up to the 6km mark and he didn’t follow.

I was now seeing a bunch of people up ahead, and they looked tired. This was exactly as I’d visualized it the night before. I continued to keep the pace easy until the turn at 6.25km, and then I really started to push. I passed three people before Deer Pen Road (what a name — but also, there’s a deer pen there, so…), then another two on the downhill section of Spring Hill Road (one of these turned out to be my rival for the M35 category, though I didn’t know it at the time). At the base of the final climb, I passed another person, then really hammered the uphill and passed someone else. I crossed the line in 27:29, 17th overall, first M35. (Also, Alex got the $100 for third male Master.)

If you look at the results for the runners who finished around me, you can definitely see how much slower I went out — and (mostly) how much faster I finished. The third number from the right is an early split, around 1.5km. I’m 20-30 seconds slower than everyone around me. The second number from the right is the “Kill the Hill” split — the time it took to climb the last hill. With the exception of the estimable Jessey the Elf, I ran this 10–20 seconds faster than most people around me (I was 17th overall, but 7th on the final climb). My “treat it like a tempo and finish fast” approach probably wasn’t a bad actual race strategy for this course.

I’m not sure what this means for my overall fitness, but it can’t be a bad sign. I ran this 30 seconds faster than I ran Cross-Country Nationals in November, which I raced as hard as I could and which was a goal race. Strava thinks there was slightly more elevation gain there, but I’m not sure — High Park feels like it was the harder course. The weather was definitely better here, though, and I was racing on roads, in Nike Vaporfly shoes, not on frozen mud in spikes like in Kingston.

Anyway, I’m sufficiently buoyed by the whole experience that I’ve decided to run the Bum Run 5K in three weeks and actually race it. Maybe I can set a PB, or even get under 16:00.

Anyway, I’ll see what kind of shape I’m actually in.