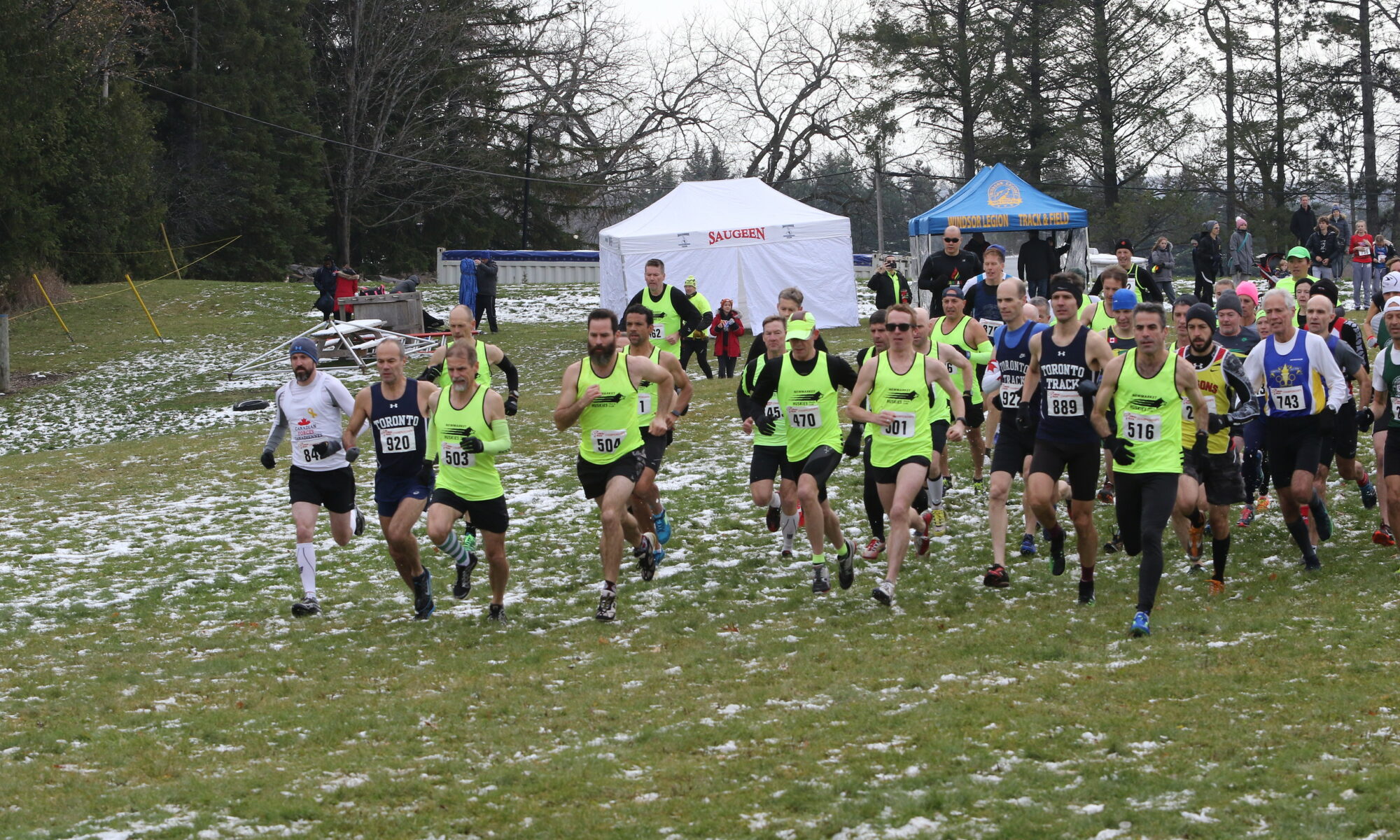 My cross-country season last year was short but glorious: I ran two races, the Sunnybrook 8k and XC nationals in Kingston, and I had a blast and posted some good results.

This year was the same story: two races, both very fun, both with good results. Last week, it was the Sunnybrook 8k once again. Yesterday, it was the Ontario Masters championships in King City.

I was up bright and early to eat some crackers and drink some beet juice. Then I took a Lyft up to Yonge and Eglinton (why does the Toronto subway not run on Sunday mornings???) and got a ride up to King City with Simon and Jay. We’d been worried about rain and snow all week, but it was clear on the drive up and the weather was going to be about as good as you can expect for mid-November: 5 degrees above freezing, no rain, no snow.

We were there with plenty of time to preview the course. It was 5k total, with loops of 2k and 3k. The first loop is pretty technical, with lots of narrow trails through woods, muddy sections, some not-particularly-steep climbs and descents, and a nice flat, straight dirt path through woods leading back to the start/finish area. The second loop repeats the first, but adds a nasty extra section that includes a very long and steep hill followed by an even longer, also-very-steep descent. From the bottom of the hill, it’s a pretty flat, smooth kilometre to the finish.

Looking at the entry list, I could see I had a good chance at taking the overall win. Indeed, Simon told me straight-up that he’d be disappointed in me if I didn’t come in first. No pressure. My plan was just to stay in contact with whoever went out hardest, make it up that steep hill with them on the last loop, and then make my move on the downhill and push to the finish.

Things went almost exactly according to plan. (Is my blog getting boring due to a surfeit of success and lack of adversity?) I followed the leaders through first lap, at what felt like a very comfortable pace. I stayed with them up to the steep climb on the second lap, stuck with the runner who made a move up the hill, and then kicked hard downhill.

This is where the “almost” came in to play. As I was kicking downhill, I just about wiped out. There were fallen leaves all over the path, and they were wet from snow that had melted from earlier in the week. After my slip, I took it back a notch, then kicked once I was back on level ground. It worked. Although I was having a hard time figuring out where I was on the course and how much more running I had to do before the finish line, I did eventually make it there with enough of a gap over second-place finisher Leo Papail for first place.

Next week, I’m going to run my last outdoor race of the season: the Holly Jolly 5k on the route of the Santa Claus parade. It’s likely to be a fast course with a lot of downhill, and I’m hoping to post a PB.

(Edit, a week later: Yep, this was my most boring post so far. But I’m absolutely not going to wish adversity on myself. Keep running smart races and winning them and writing bland blog posts, self!!)