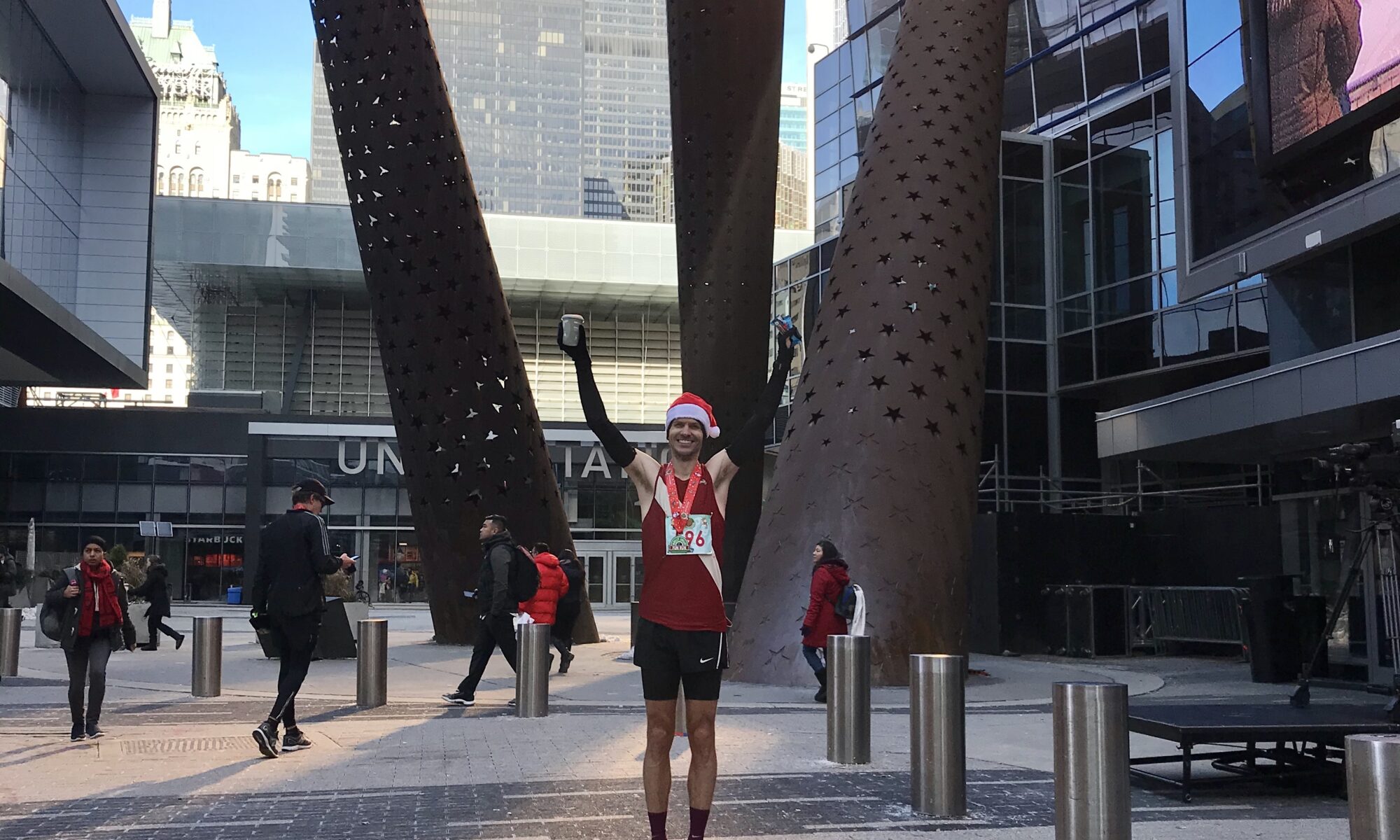 I’d been looking forward to the Holly Jolly Fun Run — a 5k along the route of the Toronto Santa Claus parade —since the moment Phil mentioned it earlier in the fall. It has absolutely everything I love in a road race:

The latter point deserves some elaboration. This is a serious net downhill. The first kilometer and a half westbound on Bloor from Sherbourne to Avenue is pretty much flat, with a few gentle uphills and downhills. Then you turn left toward Queen’s Park and it’s 3.5km of steady downhill. It’s not very steep — about 10m per kilometer, or 1% — but that’s sort of ideal for pushing hard without destroying your quads. You run straight past College, Dundas, Queen, keep going to Union Station, pass under the tracks, and then turn left toward Scotiabank Centre, home of the Raptors (and the Leafs, bleh).

I was feeling in pretty great form going into the race, but had a nagging sense I hadn’t really pushed myself in a while. I won two cross-country races in the weeks leading up, but in neither had I really had to race hard. So I was hungry, rested, but a little afraid I was rusty.

Phil came by my place to pick up his race kit on Saturday evening and made it clear to me that I would need to get into the Christmas spirit for this run. He said he’d be wearing a Santa hat, a green-and-red outfit, and jingle-bell bracelets on both wrists (hooves?). I told him that it wasn’t really my style, and I wasn’t about to sacrifice speed or mental calm to please the kids along the route. He told me point blank that I needed to stop by the dollar store for a Santa hat at the very least.

And so I did. Race morning, I slept in gloriously late, did my usual Premium Plus and coffee breakfast, drank my beet juice shot, took my caffeine pill, and jogged the 4km to the race start, stopping for a $1.25 Santa hat en route. When I saw him at the start line, Phil was clearly pleased with my decision. (I also realized that my red Tracksmith singlet, with its barber’s-pole diagonal line, would make me look a little bit like a North Pole marker. This was good.)

My concern at the start line was that no one looked particularly fast. Yes, this race calls itself a “fun run.” But it’s a certified course, and as I mentioned, it promised to be fast. I figured all the quick runners would be out. One kid looked like he’d be fast, but that was it. I prepared mentally to run my own race.

My plan was as follows. Back in October, I’d run a really great 5k for a huge PB of 15:56. That was on a net uphill course, so I knew I could go faster here. My 5th Avenue Mile predicted a 15:25, which still felt a bit ambitious for a flat course, but seemed reasonable for a net downhill. So the strategy was 3:05 kilometers, with tiredness and incline hopefully balancing one another out along the route.

After a pretty “fun run” start (no starting gun, no walk-up procedure, lots of kids taking off a few seconds early) we were off. The fast kid did indeed seem fast. I tucked in behind him for a quick first kilometer of 3:00. Seeing that on my watch, I decided to ease up just a bit for the second kilometer. The fast kid pulled ahead of me and I let him go. As we turned left toward Queen’s Park, he had 15 or 20 metres on me. When I passed the 2km marker (amusingly and helpfully, volunteers were holding the kilometer markers and kind of dancing around with them, so they were impossible to miss) in 6:08, so I’d run the second kilometer — which had a significant uphill — a little too slow in 3:08, but was still on schedule.

From then on, it was all about pushing myself without going too nuts. I concentrated on continuing to keep my legs turning over fast — I relax too often in the middle of races, and I was determined not too let that happen here — and on running tangents. It was clear to me that the fast kid was not doing the latter, but he still had a healthy lead through 3k, where I arrived in 9:13, with a solid 3:05 km.

I was still feeling great, and feeling fast, in the fourth kilometer. I was getting a lot of cheers on account of the Santa hat (Thank you, Phil!) — “go Santa,” “on Rudolph!,” “deliver those presents!” The only blunder was when I just missed a young mother with an exhaustion-spit.

The exciting thing was that I was clearly gaining on the fast kid. By 4km (12:18) he was well within my sights. I just kept going at my pace. With about 600km to go, I passed him, and sped up just a bit. When I could see he wasn’t following, I kicked.

The road surface passing under the tracks at Union was really uneven and filled with potholes — memories of the 5th Ave Mile! — but I managed not to stumble too much. I sensed he was gaining on me a bit as I approached the hard left turn at Bremner Blvd, so I committed to an all-out sprint to the finish.

It worked. I won with a comfortable margin. (The results say one second, but it felt — and maybe looks in the photos? — like more.)

My time was a totally amazing 15:15 — 41 second better than my previous PB, and the kind of time I never thought I’d be able to run in a million years. In the days since, my club mates have gone out of their way to try to deflate the time — “fun run!” “massive net downhill!” — but I’m still pretty impressed with myself. And they definitely can’t take away the victory, which was very sweet indeed, and the result of really solid race tactics. This isn’t quite the 5th Ave Mile, but it’s definitely the second most gratifying win of the year.

Phil came in shortly after me, running 16:32, his best time in 25 years. (Yep: the course was fast!) Then the real fun begun, as we dug into the delicious selection of post-race snacks, the most satisfying of which was the hot chocolate, of which I had three. Then Marta met me, gave me some warm clothes to put on, and we were off.

This is a decent place to mention the few things that weren’t perfect about the Holly Jolly 5k:

But I won’t grumble.

That’s the last race for me for a while. I’ve been taking it really easy this week, then I’ll get back to lots of easy miles and working on some indoor speed. I think I’ll run another Xmas 5k in Palm Springs in late December, but the next goal race will be a sub-9:00 3k in January or so.

Anyway, we’ll see. For now, I’m enjoying winning races and getting faster all the time. Man am I lucky to have found something I love and am really good at. What a three years!