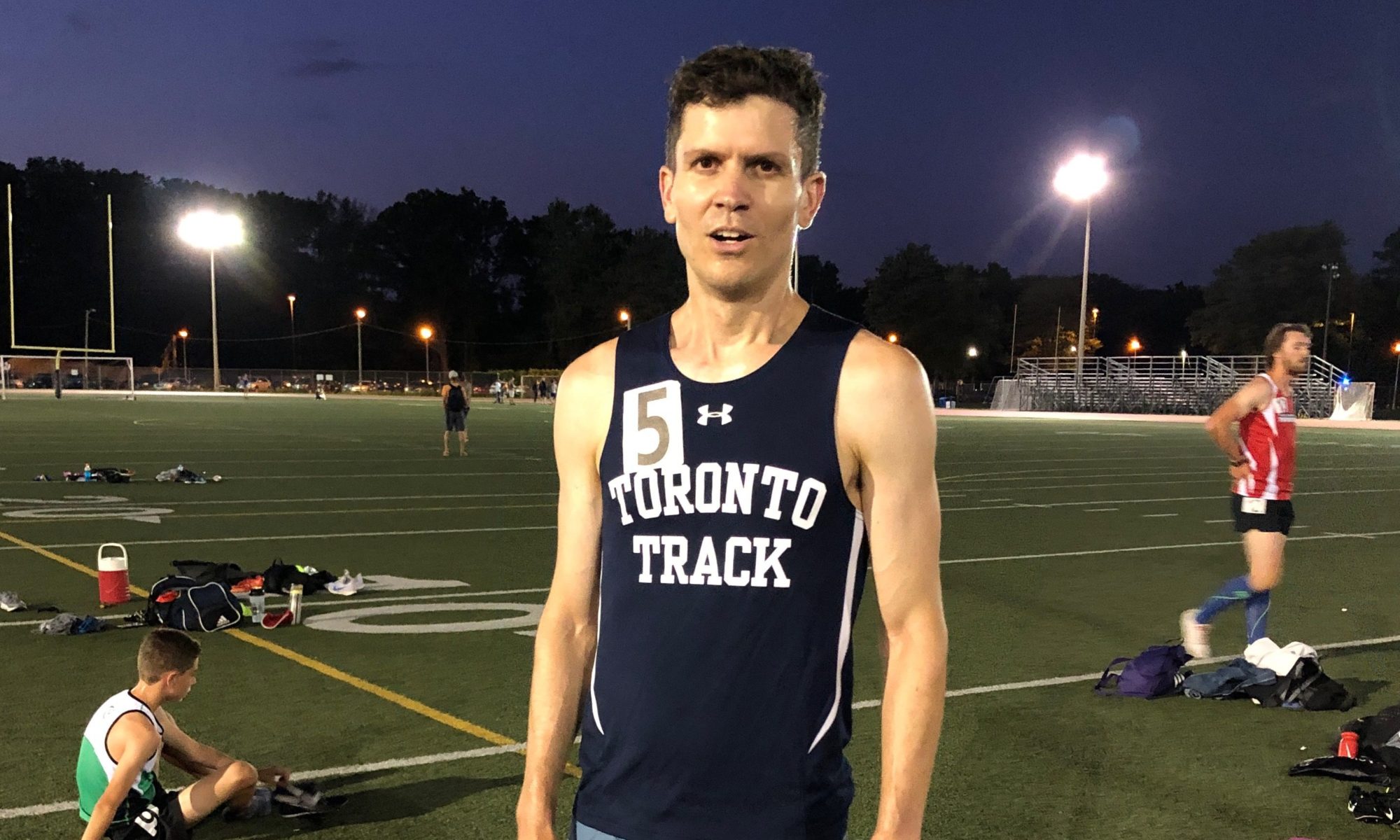 Okay, the season was supposed to be over after NCCs.

It was all perfectly set up. I had a conference to go to in Pittsburgh two days after NCCs ended, and the plan was to stop running completely for a couple of weeks starting then, letting my body recover from all the hard racing in the gorgeous environs of Steel City. (Seriously, though, Pittsburgh is great.)

The problem was that I didn’t feel like I needed recovery. My body was fine. No injuries, and not even really any aches or pains. So although I did take it pretty easy in Pittsburgh, only running a couple of times on the treadmill, I started running again as soon as I got back.

I looked at the race calendar, and there they were: two more races in Hamilton to cap off the season. Some people from my club were even going, since a bunch of them had had the starts of their seasons delayed by injury and wanted to get races in while they were feeling good.

The first try was the Hamilton PB Twilight on August 5th. There was no one seeded around my goal time of 4:14, so I almost ran the 800 instead, but at the last minute someone signed up at 4:12, so I registered too. At the same time, Coach Paul emailed to ask if I’d like to run the 800 in the Distance Medley Relay event that night, along with some of U of T’s best male runners. I said yes but was immediately a little freaked out about the prospect of racing a hard 1500 and then doing an 800 with a bunch of national-level guys less than an hour later. But I tried not to worry about the DMR too much and just focus on the 1500.

I drove down with Phil, who was hoping to run under 4:30 for a season’s best in my heat. We got there with plenty of time and had a relaxing warmup. I managed to find my DMR teammates and apologize in advance for what promised to be a very lackluster performance. It was clear they weren’t taking the DMR seriously, which was a relief.

This seems like a good place to say how much I love the Hamilton events. They’re super well-organized, run on time, have a good announcer who plays good music and very friendly and professionals volunteers, and the results are posted immediately online. Thanks to the organizers and everyone involved.

My plan going into the race was to try to run dead-even splits of 67 seconds to aim for 4:11. This was more or less just to trick myself into starting strong; although I would have been really happy to run 4:11, anything under 4:15 would be fine. Since there was that guy with the 4:12 seed, my ideal situation was following him home in even splits to a huge PB.

That’s not how it worked out. I went out hard from the line and slotted in right behind 4:12 Guy, which was perfect… until he basically stopped at 150m. Clearly, he knew who I was, knew I’d seeded myself at 4:12 too (to be sure I was in his heat), and wanted me to take the lead. Not wanting to start with a 75 and have the race over before it even began, I reluctantly took the lead. The first lap was 69 — too slow, but not fatal.

I felt them breathing down my neck, which kept me honest on the second lap. I was sure I’d run it in 67, but I was more like 68. Knowing the two guys sticking in behind me (for there were two!) probably had a better kick than me, I tried to make it really hard on the third lap, pushing for what I thought would be a 66 but was a 67. Naturally, both guys passed me with 400 to go, but I still ran a really fast last 300, in about 49.

The result: 4:14.67, a significant PB. When I crossed the finish line, I was still pissed off about being forced to lead, and not hitting my splits for 4:11. But, as with my last PB, eventually it hit me that I never really thought I’d run 4:11 and that I’d got myself a > 1 second PB — probably because I’d had two guys chasing me through the middle laps.

There was more good news awaiting me after the fast heat of the 1500. My DMR teammates had pushed themselves so hard that they were puking under the football goalposts. No DMR! I watched a really exciting women’s 800m, with Madeleine Kelly coming painfully close to word championship standard, and then it was time to go.

Phil also hit his goal, running a great 4:28 (in Vaporflies, no less). We were in pretty great spirits on the drive home and celebrated with a nice meal in Bloor West Village.

Between the two races, on Thursday, I did a very hard workout: a 600+900 time trial with 2 minutes rest. It was ridiculously windy on the home stretch, and I still managed to run it in 4:13, which seemed like a good omen.

Alas, it didn’t work out.

The good parts about yesterday: nice rides to and from the event with Coaches Paul, Coach Mike, and Lawrence; getting to hang out with my mom, who was seeing me race track for the first time ever (and also got to show me residence she lived in at Mac in the early 70s, which I’d never seen before); the delicious chocolate milk I drank after the race.

The racing itself? Not so much. Paul and Mike were hoping to set national records for the M55 800, but their race was a mess from the start, with lots of confused teenagers getting in between them and ruining their chances. Lawrence and and Nick had disappointing races. This all happened before I started, since I was racing second-to-last. As I was warming up, Mike said, “Well, it’s up to you to save the night.” No pressure.

I was sure to go out hard from the start and get through in 66 or so. There was one guy seeded at 4:10, so I thought I’d try to stay with him, but he was off with the 3:50 from the start, so that was off. I crossed 400m in 66, which was perfect… but I was totally alone, with 5 runners way ahead of me and 5 way behind. I thought I pushed through the second lap in a reasonable pace, but I most certainly did not: it was a 71. Gah! From there it was just be trying to run as hard as I could and salvage a non-embarrassing time. I guess I managed that, running a 4:16. But the overwhelming feeling after the race — and after — was extreme frustration at not having pushed myself hard enough (I was barely out of breath at the finish line) and having completely messed up that second lap. The fact that it was the last race of the season, and there wasn’t enough one coming up to get the bad taste out of my mouth, made it particularly irritating.

Anyway, time to put it behind me. It’s been an amazing outdoor season. I’ve run really fast (4:14 is a very satisfying PB) and had a lot of fun. I’ve learned a lot about middle distance running, and realized there’s a lot left to learn, which means I can probably run faster next year. Also, I didn’t get injured.

And although the outdoor track season is over, there are more races to come. Next up for me is possibly the most exciting single race of the year, the 5th Avenue Mile in New York.

That’s in a month. Until then… more running, I guess.