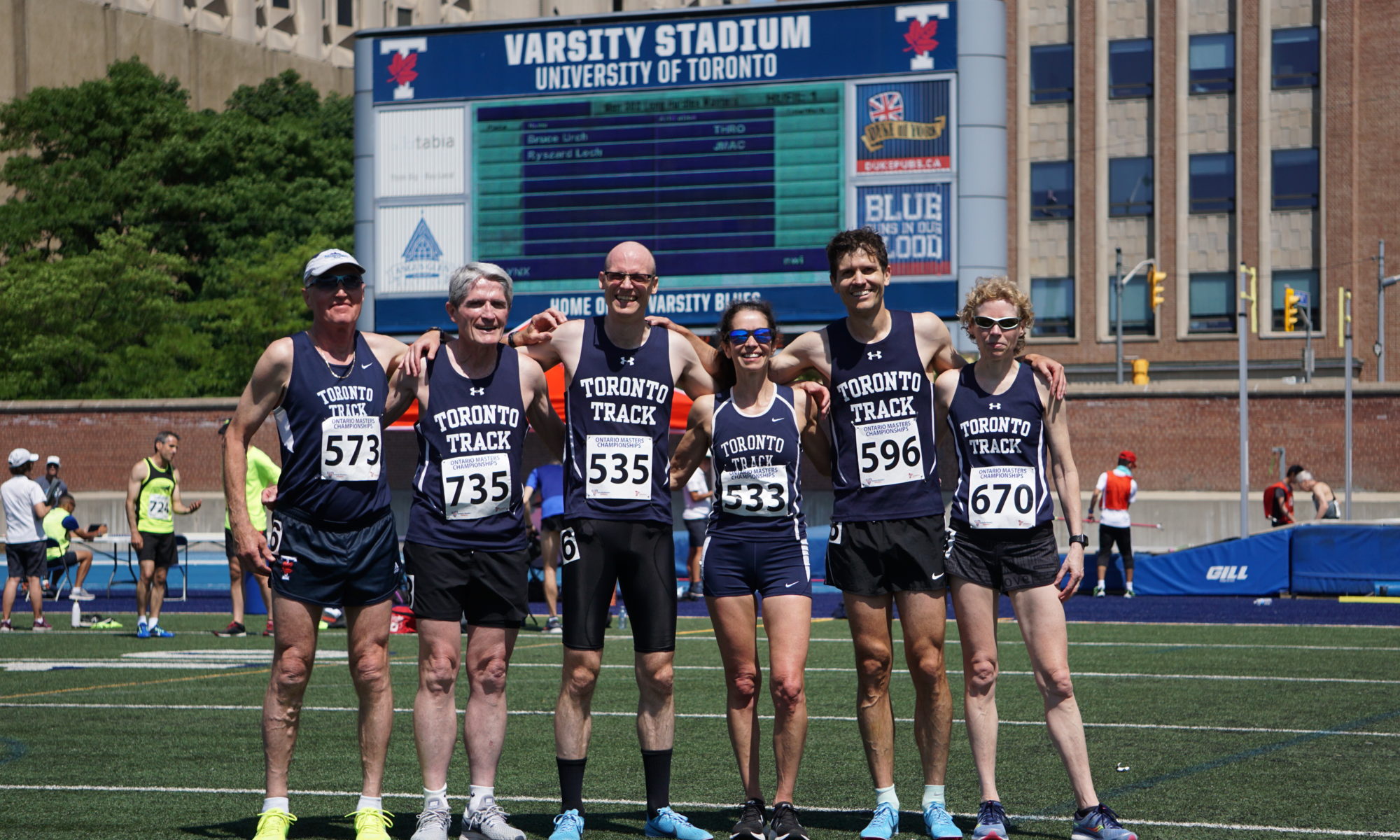 One of the many things I’m enjoying about racing track rather than marathons — which I how I got into running — is how much you get to race. So much for the “three times every two years” rule. With track, you can race every week. Or twice a week, for that matter.

Today, after doing my first two outdoor 1500s last week, I ran my first 800m race. My main reason was to work a bit on my speed, which I know is useful for the 1500, my main event this summer. But I’m also still just curious to know what distance I’m best at. I definitely haven’t thought of myself as a sprinter (800s are the tomato of track events, both a sprint and middle distance race) since I started running, but what do I know?

I signed up for the 800 at the Ontario Masters Association Championships, thinking it would be a low-pressure event at which to test myself. “Low-pressure” not because there aren’t great runners there, but because they mostly aren’t in my age category (“real” masters running starts at 40, like life), and so there isn’t any particularly fierce competition to stress out about.

Anyway, I nonetheless managed to quickly get all nervous about the race. Partly because a bunch of quick people signed up for the meet, and most of them ended up in my heat, which featured four runners seeded at 2:06 or better. Partly because I’d always heard how brutal 800s are, and I realized I’d be experiencing that first-hand soon. Partly because I just love putting pressure on myself.

I always sleep badly the night before a race. Yesterday was no exception. I was watching My Cousin Vinny on TV for some reason, and although it was very late, I just couldn’t turn it off, so I stayed up until nearly 2am (wakeup was around 7:30). When I finally got to sleep, I dreamt about racing 800s all night. Surprisingly, the main dream I remember wasn’t a particularly stressful one: I ran the 800 really well, won my heat, and finished in 2:05, one second better than my goal time. But then I kept waking up and having to remind myself that it was only a dream, and I had not yet run the race, and had not run such a respectable time. Which would stress me out.

Eventually I woke up, got ready, ate my new favourite pre-run food (Premium Plus saltines!), and grabbed my copy of Peter Coe’s book Winning Running. I knew it had a section on 800 race strategy, which I proceeded to read carefully as I munched on my crackers. I love the tone of this book: it’s all about valour, bravery, commitment, and fierce competition. It has a very Victorian vibe to it. You need to take it all with a grain of salt (much like my crackers), but it can get you fired up. Peter’s advice, basically, is to go out fast, get in second position, run just off the leader’s right shoulder right on the line separating lanes one and two, speed up at 400m, kick like hell in the last 100m, be brave, be like Seb Coe, and WIN!!

All pumped up from Coe family enthusiasm, I set off to Varsity Stadium. It was a beautiful day: sunny and a little over 20 degrees at 10am when I arrived. I jogged a bit, did my strides, met up with Jay, and got some last minute advice from Bill: sprint as hard as you can to the top of the curve (first 50m or so are free energy, apparently — the “phospho-creatine” system, I think, neither anaerobic nor aerobic), and don’t slow down at 400m.

I felt good at the start line. There was a “waterfall start” — apparently a bad thing — but it wasn’t a problem as I sprinted hard off the line, following my tangent, and immediately ended up where I wanted to be, in “the Coe position”: second place, on the line, on the leader’s right shoulder. I felt like I could be running a little harder, but I could hear Peter Coe telling me “at a championship race, it’s not about times — it’s about winning!” I stayed where I was.

This is going to be a really boring race report. Here’s what I did. I stayed in “the Coe position” for 400m, coming through in about 61s. At 400, I sped up as I was told to, but the leader — Sheldon Mirco, as I later learned — saw me speed up and adjusted his pace to maintain his position, precisely as Peter Coe predicted he would. I kept pushing, and was starting to feel a little tired, but not as bad as I’d anticipated. I held my position until I came out of the final curve and then I sprinted, gapping Mirco (who, I’ll add here, is in the M40 category and crushed me on age grading) and coming in first. I could almost feel Peter patting me on the back.

My time was 2:05.84 — just like in my dream! (I told this to Jay, and he asked me, “To the hundredths?!” Only a real runner would ask that question. But no, I don’t recall the hundredths in my dream!) This was exactly what I was hoping for — and a real bonus in a race where I wasn’t really looking at the clock. I got the gold medal for my age category, as well — another bonus!

My age grading was just a touch under 83%, more or less on par with my recent 1500s. I find that pretty encouraging, given that it was such a new kind of race for me. So perhaps 800s will end up being my thing. I definitely really enjoyed this one. (As Coach Paul said afterward, “They’re a fun race!” — very true. I felt like a racehorse out there, just going real hard for two minutes.) I’ll keep my main focus on 1500s, but definitely try to work in a few more 800s this summer.