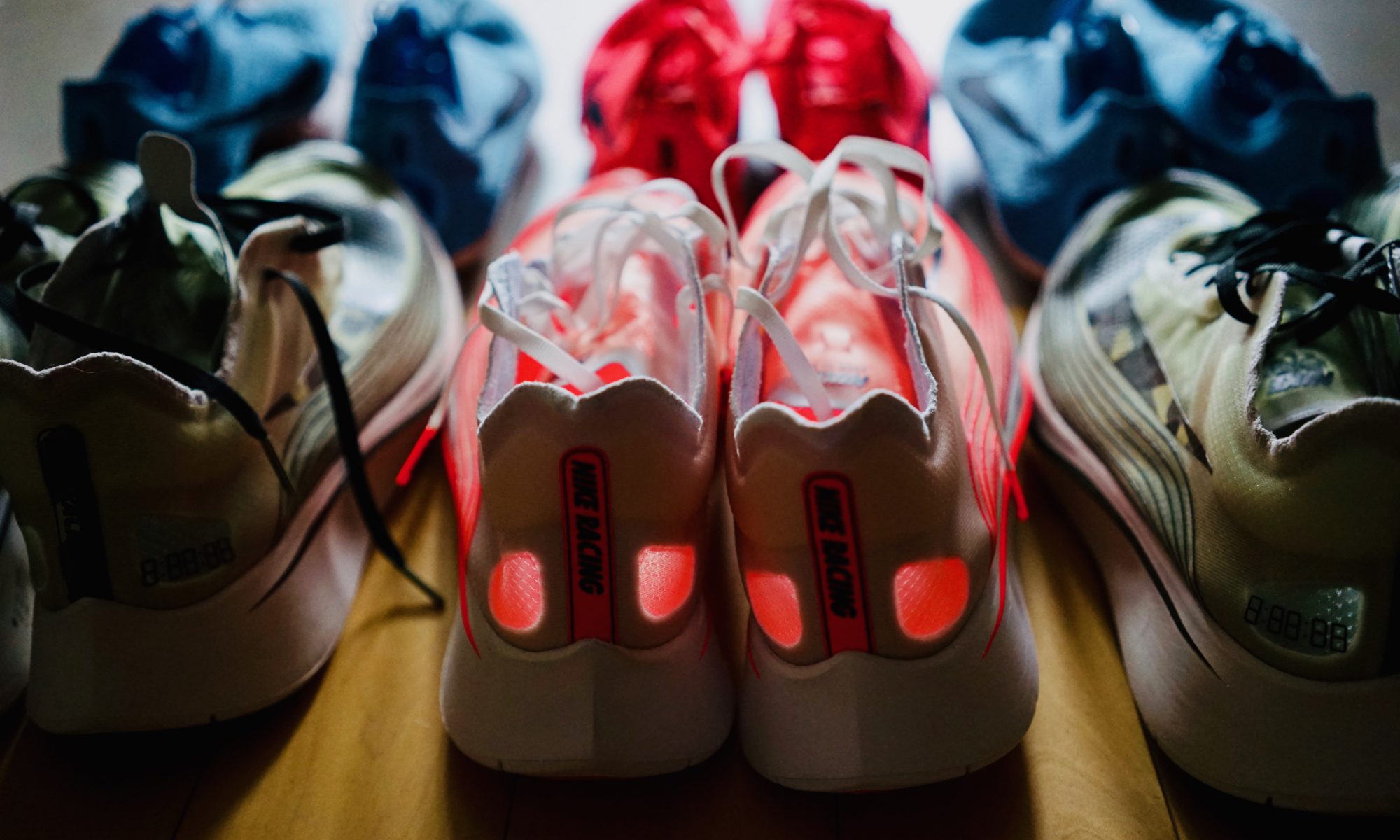 My partner’s parents live near the Dixie Outlet Mall in Mississauga, and we stop there fairly often. Much of my wardrobe consists of weird castoffs that Tommy Hilfiger couldn’t sell in his normal stores, Levi’s 501 jeans purchased at 50% off markup, and weird odds and ends from Winner’s.

But for some reason I’d never thought to investigate the Nike Outlet Store. Until one fateful day in February, that is.

I went in expecting to find a bunch of “lifestyle” sneakers and basketball shoes. I definitely wasn’t expecting to find running-nerd shoes like track spikes. But the first thing my eyes landed on when I entered the store was a pair of Nike Zoom Victory Elite 2s. I’d just read a review of these a few days before — I was thinking about buying my first pair of spikes for my indoor track training, and I was curious to see what the equivalent of the Vaporfly was (you know, something ridiculously fast and ridiculously overpriced). What I came up with was the Victory Elite 2s, which have a carbon fibre plate and cost in excess of $250 CDN.

Well, the ones in the Outlet Store didn’t cost $250. They were a totally reasonably-sounding $79. I texted my club mate Jay to make sure these were good spikes and this was a good price. He replied that they were, and it was, and asked me to pick him up a pair as well.

A few days later, Jay and I wore our new spikes at a club workout. Everyone was really interested in them — and then lost their minds when we told them how much we’d paid. I was heading back to my partner’s parents’ place that weekend, so I asked if anyone wanted me to pick them up a pair. The answer was a resounding yes — from no fewer than six of them.

On the Friday before I was going to the Outlet Store, I ran an indoor race at the University of Toronto, and wore my new pair of Victory Elite 2s. Two separate people came up to me and asked where I got them, and if I’d got them on sale. Word was getting out about the incredible sale at Dixie Mall. I decided to head there a little earlier the next day.

When I got there, it was busy — and there were a suspicious number of skinny people seeking out pale blue track spikes. There were way fewer of the Elite 2s, but with a lot of patience, I was able to find every size I’d been sent for. (I also found a beautiful pink pair of Victory 3s for $39 and snagged them for myself as a “workout spike,” along with a second pair of Elite 2s a half size smaller, for use without socks.)

When I was in line, though, a nice man came up to me and asked if I happened to have a pair of 11.5s in my massive pile of boxes. I said I did. He said his son was a high school track athlete who desperately needed a pair of 11.5s, of which none were left. I told him these were for my coach Paul — but I could be convinced with the right story. He told me all about his son — who, as it turned out, was in the UTTC junior development program, had been at the same race as me the day before (where he’d heard about the sale, of course). He also said his high school track coach was none other than my other coach, Mike. I told him he could have the shoes. (As it turned out, a pair of 11s fit him better, so Paul got his 11.5s anyway).

It was a bit of a pain getting everyone to pay me back for their $79 shoes (I ended up dropping nearly $800 at the Outlet Store that day!), but worth it in the end — especially when a few of the pairs were used to win medals at the World Masters indoor championships in Poland the next month.

In the months since then, I haven’t been able to keep myself away from the Nike Outlet Store. My main purchase has been many pairs of my current favorite everyday shoes, the Zoom Fly SPs — they’re like even cushier, sleeker, more stylish Hokas — which I picked up for $70/pair. I’m particularly fond of the ones with the goofy camo design. I’ve also grabbed a pair of my favorite flats for track workouts, the Zoom Streak 6, which was only $30.

But I need to stop going. My closet’s getting full.

I decided not to do any more road racing after the Bum Run and just to keep getting in solid training. With my goal races on the track and not until July, it makes sense for me to be focusing on VO2 Max training and keeping my volume up at this time of year.

I’ve also been running my Saturday tempos on the track rather than at Mount Pleasant, and they too have been really hard. Last week, Mike prescribed an 8k (!) continuous tempo on the track at threshold pace, and this week I did a 3k / 2k / 1k workout at 3:20/km. I wasn’t sure I’d be able to get through either workout, but they both proved to be manageable.

I’m definitely feeling fitter than I ever have. In large part, that’s due to the increased volume I’ve been running. I’ve been in the upper nineties for the last two weeks, and this week finally went over 100km — which I’m pretty sure is the longest I’ve ever run in a week.

To tie the two parts of this post together: my right foot has continued to bug me… in every pair of shoes except Zoom Fly SPs. When I wear my Hokas, the front of my foot feels pinched and a tendon gets squeezed up against my metatarsals. In the Zoom Flies, there’s no pain at all. So I’ve been wearing them for easy runs and for some workouts, including that tough 3/2/1 yesterday. They’ve been great.

I’m still sorting out when I want to actually start racing on the track — but I think I might run a mile race on the track in Vancouver when I’m there in a few weeks for a conference.